Councillor Mike Butler wears many hats but never actually wears hats! Mike has lived and worked in Wolfville for 20 years and has become a friendly face in the community. Through his previous jobs at the Atlantic Lighting Studio, TAN Coffee, and host at The Church Brewing Company, Mike built up a love for this town and its residents that's very strong.

Since December 2009, Mike has been a part of 77 productions with local community theatre groups, in the capacity of acting, directing, producing, marketing and stage managing. His involvement with theatre has given him the chance to work with CentreStage Theatre, Valley Ghost Walks, Edalene Theatre, Quick as a Wink, some local schools, The Fezziwig Society and Mike was founder, and operator of the Wolfville Theatre Collective for 5 years.

Mike, when not performing Council duties, can be found at the constituency office of MP Kody Blois, or guiding on the Magic Winery Bus, in the Summer or enjoying the Town! He also writes for the Grapevine (and other local publications) and strives to make everything sunny and fun. 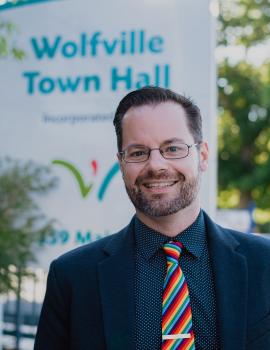